skip to main | skip to sidebar

The science of climate change is good enough to show that global temperatures will rise unless we cut back drastically on greenhouse gas emissions. What no science can do is show whether we will do so – or what policies nations will adopt if we do – or if we don’t. Nor can we predict the human – health, nutritional, political and economic – consequences of rising temperatures. Yet these are what people care about.


We badly need ways of thinking about the implications of climate change. Most of what’s written gets hung up on the uncertainties of the science. If we don’t know, and we don’t, whether temperatures will increase by two or four or six degrees how can we prepare?

The answer is scenario planning.

In scenario planning, a method pioneered by Shell, we focus on the uncertainties, not on forecasts, and use these to define a set of possible scenarios. If we get this right the actual events will follow one scenario or, more likely, fall between several scenarios. But in any case we’ll have considered what we can and should do before we have to do it.

Climate change is a long-term problem so let’s look at the long-term – 2030 and beyond On that timescale little is certain but there are two big uncertainties.

The first uncertainty is the temperature increase. The global temperature is currently 0.6 degrees higher than that in the pre-industrial period. By 2030 we ought to know whether we’ve managed to keep the increase below two degrees. That’s hardly risk-free but it should be manageable. If we haven’t then we’ll already be aware of the positive feedback effects that will drive the temperature to a four or even six degree increase. (Some models suggest that rises over ten degrees are possible but let’s not go overboard; four degrees is bad enough.) (The environmental consequences of various possible temperatures have been discussed by Mark Lynas in Six degrees. Prof. James Lovelock has discussed the positive feedback effects in The Revenge of Gaia.)

The second uncertainty is the degree of international collaboration on dealing with climate change. The Montreal treaty on CFCs showed that international collaboration is possible. The post-Kyoto experience shows that it’s very hard to get when it requires significant economic sacrifice. However, even politicians and civil servants can learn from experience and worsening climate will provide many powerful lessons. The real uncertainty is whether governments will commit to enough change soon enough to avoid triggering the positive feedbacks.

Now we combine the two to get our four scenarios as shown in the figure. 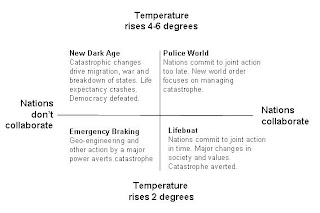 There are two scenarios for a world without catastrophic climate change. In the Lifeboat scenario this is achieved by international collaboration. In the Emergency Braking scenario collaboration fails and its achieved by unilateral action, mainly geo-engineering, by a major power.

There are also two scenarios that do involve catastrophic climate change. In the Police World scenario the nations collaborate to manage the consequences whilst in the New Dark Age scenario they don’t.

Plausibility
I’m aware that two, perhaps three, of my scenarios may sound more like science fiction than sober reflection. However, these scenarios run forward from 2030 and much of today’s world would have seemed like science fiction to our parents. It’s almost impossible to overstate the impacts of four degrees of warming. It’s inconceivable, at least to me, that our civilization will be unchanged by these impacts and it’s time we took this seriously.
Posted by David Flint at 04:43

David Flint
I'm a management consultant with experience in IT and marketing. As a humanist I believe in the power of thought to understand problems and of imagination and co-operation to address them. As a trained scientist I see the scale of the climate change problem and the lack of meaningful response.