skip to main | skip to sidebar

This post is obsolete. It has been replaced by a new set of scenarios.


We badly need ways of thinking about the implications of climate change. Most of what’s written gets hung up on the uncertainties of the science. If we don’t know, and we don’t, whether temperatures will increase by one or two or four degrees how can we prepare?

The answer is scenario planning.

In scenario planning, a method pioneered by Shell, we focus on the uncertainties, not on forecasts, and use these to define a set of possible scenarios. If we get this right the actual events will follow one scenario or, more likely, fall between several scenarios. But in any case we’ll have considered what we can and should do before we have to do it.

Climate change is a long-term problem so let’s look at the long-term – 2050. On that timescale little is certain but there are two big uncertainties.

The first uncertainty is the temperature increase. The global temperature is currently 0.6 degrees higher than that in the pre-industrial period. By 2050 we will know whether we’ve managed to keep the increase below two degrees. That’s hardly risk-free but it should be manageable. If we haven’t then we’ll already be aware of the positive feedback effects that will drive the temperature to a four or even six degree increase. (Some models suggest that rises over ten degrees are possible but let’s not go overboard; four degrees is bad enough.) (The environmental consequences of various possible temperatures have been discussed by Mark Lynas in Six degrees. Prof. James Lovelock has discussed the positive feedback effects in The Revenge of Gaia.)

The second uncertainty is the degree of international collaboration on dealing with climate change. The treaty on CFCs showed that international collaboration is possible. The post-Kyoto experience shows that it’s very hard to get when it requires significant economic sacrifices. However, sentiment is already changing and a recent survey of business executives by McKinsey showed significant concern about climate change. Action now seems likely. The real uncertainty is whether governments will commit to enough change soon enough to avoid triggering the positive feedbacks.

Now we combine the two to get our scenarios. I ignore the possibility that we can keep the temperature increase below two degrees without international collaboration because it’s impossible (unless the scientific consensus is badly wrong). 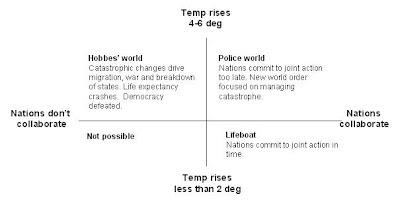 In this scenario the nations do collaborate soon enough to restrain CO2 emissions and the increase is kept below two degrees. I call this the Lifeboat scenario since it requires that every state recognises that we are all in the same boat and that its resources are barely adequate.

In his book Heat George Monbiot has described the technology changes that will be needed to realise the Lifeboat scenario in the . He believes that the and developed European nations can retain their standard of living (except for flying) by making an extensive set of changes to our industrial base. Most of this is plausible but almost every part is challenging. His conclusion requires that we meet every one of these challenges and this seems very optimistic. We will need to do more either by cutting our standard of living or by reducing our numbers.

The key assumption for this scenario is that the nations collaborate but this collaboration will not be easy. As with the General Agreement on Tariffs and Trade (GATT) there will be disputes and we will need a World Climate Authority (WCA), analogous to the World Trade Organisation, to deal with them. The WCA will have, at minimum, to issue emissions permits and to check that actual emissions do not exceed these permissions. It will have to impose sanctions against defaulters. These sanctions will have to be backed by at least the threat of military force, though it’s unclear whether this will require a world police force.

This scenario requires changes in production with fewer new products, more repair and recycling and longer product lifetimes. A significant cultural change will be needed which I’ll call green Puritanism. Green Puritans will disapprove of excessive consumption and travel and these attitudes will reinforce and be reinforced by laws against waste.

Lifeboat will be different from our world but could be a good world to live in.

In scenario 2 the nations have begun to collaborate against climate change but not in time. By 2050 the temperature rise has already exceeded two degrees and major positive feedback effects are visible.

Major habitat changes have already occurred, eg in the and Amazon basin, leading to a marked reduction in the Earth’s carrying capacity. An increase of at least four degrees is now certain.

It’s clear that the Earth cannot support its current population and that existing human institutions cannot survive the huge population movements that these changes will provoke. In Collapse Jared Diamond has described a variety of precedents for social collapse due to overuse of natural resources.

Once the inevitability of this collapse becomes clear the multinational bodies will shift their focus from mitigation to survival. They will therefore collaborate to ensure that some people and institutions survive. They will identify the territories remote from the equator where the prospects are best and then limit and direct migration into these refuges. The rest of the Earth will be progressively abandoned.

Life in these refuges will be hard but life outside them will become literally impossible; most of those outside them will die. These deaths will be spread over many decades and will mainly be from starvation, though natural disasters and fighting will contribute.

Resistance to the new world order will be severe but the multinational authorities will take large-scale military action to maintain the borders of the refuges. This scenario assumes that the multinational authorities succeed in maintaining law and order and an industrial base but this will be at the price of human rights and ordinary human compassion. The need for vigorous military action against those outside the refuges and direction of labour within them will lead to severe rationing of almost everything and a world-wide police state.

In this final scenario attempts to international collaboration have failed to prevent temperature rises and have broken down. As the value of those cold regions in which people will be able to survive becomes clear those nations with such regions will prepare their defences. The others will attempt to negotiate access to these regions. When this fails they will resort to war.

Some large nations (eg and ) will include some refuge areas though not enough for their whole populations. Civil wars will result.

As climate pressures increase (over a period of many decades) military power will become the dominant reality in human affairs. Political authority will give way to it. Jared Diamond’s Collapse shows examples of this breakdown.

Repeated wars will inflict major damage on the very resources, both agricultural and industrial, that they are trying to control. Wars will also destroy much of humanity’s capacity to innovate, except in military matters, and to do or even understand science and the arts. A new global Dark Age will follow.

The new Dark Age will doubtless last several centuries, during which the human population will fall to a fraction of its current level. The best that can be said of this scenario is that it need not last indefinitely. The Greek and later European Dark Ages both ended and were followed by the renaissance of culture and learning. Though we have not previously experienced either a global Dark Age or such abrupt climate change there is reason to hope that our descendants will ultimately be able to rebuild a civilization.

It’s almost impossible to overstate the impacts of four degrees of warming. It’s inconceivable, at least to me, that our civilization will be unchanged by these impacts and it’s time we took this seriously. I’ll return to the scenarios in greater depth in future posts.

You are making the assumption that temperatures will keep on warming for the next 40 years. This may not be case...and we may be heading for a cooling period. I am a meteorologist and the computer models that we use have problems dealing with events in the near term. Climate models are even worse because the assumptions on how weather works over long periods of time are not fully understood. Please check with www.icecap.us for a scientific review of the science of global warming (or lack of it). It is run by a person with a Masters degree in Meteorology.

A true scenario planning review of "global warming" should include the possibility of global average temperatures going down from current levels. You are not even considering that option.

By the way, I am also familiar with the scenario planning process and plan to incorporate it into some business classes that I teach.

in Taiwan do email me, david

That Mark Lynas article is vital.

I have redubbed Polar Cities with an optional nickname, Lovelock Cities, to honor the great man that nobody is listening to...

Scenario planning focuses on an outlook for the future. It is a method with which organizations can form an idea of possible future scenarios and how these may affect their strategic objectives. Using these scenarios, an organization will be able to make better decisions when problems or changes occur. Scenario Planning Templates is a helpful method to assist your strategic planning and product or service development processes.

David Flint
I'm a management consultant with experience in IT and marketing. As a humanist I believe in the power of thought to understand problems and of imagination and co-operation to address them. As a trained scientist I see the scale of the climate change problem and the lack of meaningful response.